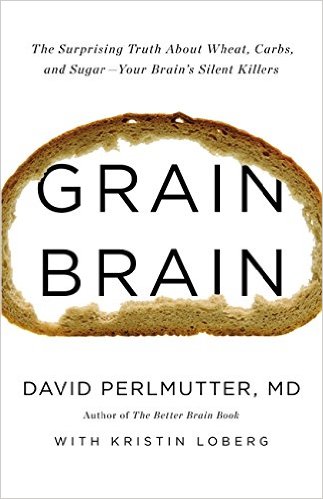 I read Grain Brain and in this review, I’m going to explain exactly what it teaches about grains and what to eat if you want to improve health.

Grain Brain is not just another diet plan which demonizes wheat and grains as being harmful and eliminating them to lose weight, but it also gives a lot of science to suggest that when you correctly feed the mind with proper foods, you will improve mental health and at the same time burn calories and this review will explain which foods you need to eat and avoid.

Why this plan focuses on the mind more than on weight loss:

The biggest goal in the book is to help readers see how important it is to take care of your brain health because it is the tool which can lead to a longer life.

David Pulmutter, the author makes a very strong case for this by explaining how most people do not even think about their mind as being something they need to take care of.

Their bodies yes, but he mentions that the mind is one of the most important organs to help flourish because many problems such as obesity, heart disease also greatly increase chances of deadly, deteriorating diseases like Alzheimer’s and other neurological disorders which usually strike elderly people.

But what about weight loss? Here’s how Grain Brain helps achieve that…

If you can properly take care of your mind, you won’t just reduce the risk for having neurological problems, but because they are connected with general problems such as being overweight, you will also be able to treat that.

In this diet plan, the same foods and lifestyle changes that are suggested feed the brain and also help get rid of fat. However, I never saw any average results listed however, you can lose a lot of weight by following this plan.

How does the Grain Brain diet specifically work?

If any food, drink or lifestyle you have harms the brain, you need to eliminate that from your life right away. They may be causing your brain to become damaged which can cause headaches and if not handled, more major problems.

The diet approach is eating high fat, VERY low carb foods but that comes from putting a few other diet plans together:

Paleo. This plan is very close to a paleo style in that you eat a lot of vegetables and proteins from eggs. However, where paleo would endorse eating any kinds of fruits, Grain Brain does not allow for a lot of them because they can contain a lot of carbs.

Carbs and grains are basically the enemy of brain health if you consume too many of them.

In the book, David points to the paleolithic age people and shows a picture where most of their diet was eating fat and some protein, while the least was carbs since it was difficult to find.

He also showed a picture of people today whose diet is very different from that and their main consumption is carbs. He draws the connection that because we eat so many carbs, that this has led to increases in weight and diseases.

High fat doesn’t mean saturated fats. There are very healthy fats which do not ironically make you gain weight and you will get a list of them. Another diet (2 Week Diet) also proves you can lose weight doing this. And another GREAT book on fat eating is Eat Fat, Get Thin.

Gluten free. There are a lot foods that contain wheat and grain and many of them also have gluten, which David Pulmutter is also a major enemy of having a healthy mind.

There are a lot of stories David talks about where he helped patients (A child, middle aged people and elderly peopl) get rid of huge issues like ADHD, insomnia, ED, irritability, headaches, and more by just making these people change their diet. The diet helped get rid of the problems.

He often mentions the term “gluten sensitivity” which he recommends people get a test for if they have a number of symptoms which the book will list. If you have those symptoms, you may have sensitivity to gluten in which case you need to eat foods free of that ingredient (gluten free diet).

Ketogenic diet. David recommends calorie restriction and sometimes fasting as a means to help the body get into a ketogenic state where it will burn fat that will help brain health improve.

Throughout the book, the theory of cholesterol being a horrible thing and it leading to blood clots and heart diseases is shut down by David. He says that a quarter of all cholesterol in the body is taken by the brain so cholesterol is important to consume if you’re going to have a healthy mind.

And the theory that it leads to diseases is actually refuted and he says that other things people do such as smoking, drinking, eating unhealthy carbs and inflammation in the body is what can lead to those things, not cholesterol.

He does talk about LDL and HDL but really says that eating fat such as from eggs is very important.

I have also been eating much less grains (no cereals, no bread). The only wheat I eat is organic wheat seeds but I do believe eating less grains makes you healthier.

Week 1: You stop eating any non approved grains/wheat and start eating a lot of foods with fat, protein and vegetables. You are allowed to only have up to 40 grams of carbs a day.

Supplements are also recommended included DHA which is omega 3. You can get them as pills, but you can also get them from fish.

Week 2: David recommends you have some kind of exercise routine where you work out the majority of the week. Even walking is good for brain health.

Week 3: You have to set a sleeping pattern which you follow all the time and get 7-8 hours at least. A good sleep is also very important for the health of the mind.

Week 4: Everything you did for the 3 weeks are now added together and week 4 basically is a sample of the way you should live life after you end this week. Every week before added to the previous one and this one connects everything.

Also there is a preparation before you start your plan where you are recommended to get a blood test and compare it after you finish the 4 weeks.

A sample of the food list you get with Grain Brain:

Fruits (Low sugar only): lemons, eggplant, avocado. You can eat berries, but a sample menu recommends a small portion a day.

The sample menu in the book recommends eating 4 times a day. There was no number of calories allowed, but the sample look like it was under 2,000 calories a day. I think anyone who does this diet should follow the rules, but not torture themselves by being very restrictive. Eat based on BMR.

In addition to this sample, there are many also recipes.

Great plan for the brain and health!

Conclusions on the Grain Brain:

The Grain Brain is a plan that may suit 40 and above people better than it does younger people. If you are elderly or if you have ANY sensitivity to gluten and/or neurological problems, the Grain Brain may be exactly the best diet plan for you. I think this book and it’s recommendations are perfect for elderly people.

If you’re young and just want to diet, this plan may be too radical and you should try the 3 week plan, a different diet that is excellent for weight loss and flexibility in eating, but you should also try to completely eliminate most grains out of your diet, even whole grains.