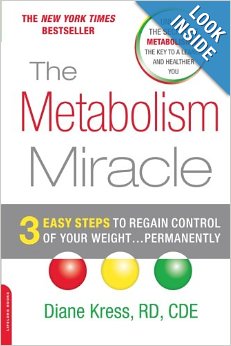 A few years back, the Metabolism Miracle diet plan became very popular because of it’s unorthodox approach to weight loss. Recently it has risen back into the public eye.

Created by Diane Kress, the way this plan works is very different than traditional calorie in vs calorie out concepts. And though it’s truly unique, it does have it’s pros/cons.

What exactly is the Metabolism Miracle diet?

This plan lasts for 16 weeks. 8 weeks on 1 phase and 8 weeks on another. The rest is a lifetime plan. It’s aimed for people who have what Diane calls “Metabolism B”, a condition which she says affects about 45% of the population.

For people with metabolism B, traditional weight loss approaches simply do not work (and some unusual ones too like this), and can yield the opposite results. In additional most notably, people with the B condition tend to have a leaning towards sweets.

And unfortunately since most of those sweets are unhealthy, the pounds add up fast.

This would certainly explain why most people go through Yo-Yo dieting, or it’s a great sale’s pitch. What both sides of the aisle can agree on is that yo-yo dieting is an epidemic among dieters. But if metabolism B does exists, how can one tell?

Enter the metabolism B symptoms:

While this is a huge list, it’s actually quite broad. And it’s important to understand 1 very important thing: Metabolism B is NOT some kind of disease, dysfunction or issue. It’s basically how your body prefers to eat and it’s just not suited for traditional methods of eating, that’s all.

It is because metabolism B people eat in a different way (A’s which is traditional), problems can occur. It’s actually been proven to be true. It’s just called metabolic type and there are 3 of them.

How the Metabolism Miracle Diet works:

For 8 weeks, you will be going through a low carb plan which will involve eating things like lean meat, eggs, low-fat cheese and vegetables for the most part. Here, carb consumption is very limited.

The purpose of this phase is to provide your liver and pancreas with a break from all the insulin production it’s had to go through due to most people with metabolism B consuming too many carbs. This 8 week “break” isn’t exactly going to be easy for most people, but it is going to help your organs recover.

You will also lose weight during this period because of 2 reasons:

2. Because you won’t be eating any major amounts of carbs and absolutely no fat, this will also help with weight loss.

Results do vary in this case so if you’ve been through this diet, particularly this phase, please let me know in the comments section below how much you lost during the 8 weeks.

Step 2: Transition back to carbs.

It’s strange to think a diet would actually have you coming back to carbs after you’ve tried to stop eating them. But in this case it works and the reason being is that metabolism B’s will eventually crave them. That’s just who they are and this is how it should be.

The only difference is that once you adopt the meal plans in this phase, it’ll involve consuming healthy carbs such as brown rice so while your cravings for sweets will be satisfied, you will also maintain and even continue to experience weight loss results.

Few diets endorse the idea of eating carbs, but in addition to this one, one you may also find to your liking is the Lose Your Belly Diet which has some foods with carbs to be eaten that are also healthy.

Anyway, from this point on, eating the old unhealthy carbs is a no-no. As long as you maintain a healthy consumption of healthy carbs, you’ll be fine and weight loss results will remain.

Believe it or not, but in this phase, you’ll actually be eating more carbs daily than before in combination with the foods you ate in phase 1. Emphasis is placed on eating fewer portioned meals, but in more frequent amounts everyday which is actually something I personally agree with.

Again metabolism B’s crave sweets and in this lifetime phase you’ll certainly be doing that, for the rest of your life basically. As for comfort?

There should certainly be tons of that here since you’ll basically be eating according to your metabolism type. This isn’t one of those diets that forces you to maintain a lifestyle you just can’t do.

3 stars out of 5. Good diet plan, but not for everyone. It’s lengthy and if you have metabolism B symptoms, it may be worth trying. See #1 rated diet (If you are not a metabolism B person and need something a little bit more traditional but effective for losing weight).

Is the Metabolism Miracle Diet worth trying?

This diet isn’t ideal for everyone, but if you are indeed a metabolic B person, it will likely work very well for you. Though it’s always recommended to consult a doctor before trying.

The idea of metabolic types has been around for a number of decades. And there are 3. This diet specifically focuses on 1 of those types which is good. Though we are all individuals, we all have different genes and different preferences on certain things.

To take 1 type of diet and run it through all categories of people is likely going to lead to a lot of unhappy results, so with that said the Miracle Metabolism diet is good for sticking to it’s audience. Certainly there will be people who will argue that there aren’t any metabolic types and that losing weight is about “insert dieting talk here”.

But this diet is founded on solid evidence and is good, but the specific audience. If you’re not one of these people, a better recommendation would be the #1 rated diet on this website, a plan that works for most if not all categories of dieters.