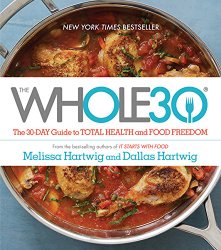 I’ll admit, originally I though the Whole30 wasn’t just a diet, but something that had to do with eating or not eating grains, yet after reading the book, it turned out this plan was something completely different and really more, it was a plan to help people get healthier.

Well if it’s not a diet, then I don’t need it…right?

If this is how you feel when you hear that the Whole30 isn’t a diet, you should read the whole review because if you do follow this plan, you will lose weight, however, there is not a single thing in the book that encourages or talks about doing things such as weighing yourself or counting calories. They even made rules against that.

So how can you then lose weight? Well that’s where we have to learn how this thing works…

How does Whole30 really work?

The concept is this: Basically, if you’re eating healthy, you don’t have to worry so much about what the scale says or how many calories a food has, all of these things will regulate themselves and your body will react to it by working better and naturally losing the weight and that’s basically how the Whole30 works.

But there’s 2 parts to the Whole30 which make it work:

Now while I was reading this book, I couldn’t help but feel I heard this concept of elimination of foods somewhere and I did eventually remember, it was from the Virgin Diet which had a more condensed approach to this. In fact, based on what I remember, out of the 7 foods the Virgin Diet tells you to eliminate from your diet,  of them are actually mentioned in the Whole30 as well, with the one food that isn’t being eggs.

But anyway the 2 parts of the diet I explained work together for 30 days. You eat healthy, but don’t eat certain things that aren’t healthy (5 food groups).

Not all of them are actually foods, but the book provides a lot of evidence on why you should not eat those things and frankly, I agree with a lot those things.

Any foods or drinks that fall into those 5 are not allowed to be eaten or drank during the 30 days you are on the plan. Your goal is to eliminate those foods for those 30 days and then start to eat/drink them again, one by one to find out IF they affect your health in a bad way.

Why these groups are actually restricted…

Drink too much alcohol? Well you’re going to have hangovers, do foolish things, kill brain cells and not really help your health.

Eat/drink too much dairy? You may have constipation, bloating and other problems arise, especially if they aren’t organic.

Eat too many legumes? Well this is the one where I wasn’t in agreement with because I know in certain proportions, they can be beneficial, but they do say it causes gas and bloating which is true if you eat too much of them.

Eat too much sugar? I have no problem eliminating 4 of these groups from my diet, but sugar is easily the hardest! I was recently sick and was on antibiotics and was drinking A LOT of tea, but instead of sugar, was using raw honey, but a lot of it. I ended up breaking out in more zits around the body. Too much sugar even if it is from an organic source is bad for the body.

Eat too many whole grains? They also point to this being a problem, especially if it isn’t organic. You’re talking a lot of starches, carbs and other ingredients that are NOT good for the body in high amounts.

Basically what Whole30 has done has taken any foods which cause inflammation, diarrhea, bloating and any negative reactions from the body and put it into those 5 groups.

Eliminating those 5 groups eliminates you getting those problems again which is why there is a tremendous list of health benefits of being on this type of plan.

If you read the food/shopping list of this plan, you’ll notice a lot of foods fit into the same category as those you would eat if you were doing a paleo diet. This plan even admits it’s very similar to it, but there are a number of foods and recipes they have which aren’t that way, plus legumes are technically included in a paleo diet but they aren’t allowed in the Whole30 plan.

The specific rules of doing Whole 30:

The interesting thing about a plan like this one is that there really aren’t any rules other than eating 3 meals or so a day from their approved list of foods and just NOT eating from those 5 food groups.

That’s really it. They DO have a sample 7 day meal plan available.

But all you’re doing is examining how your body reacts when it isn’t given those “bad” foods/drinks. When you don’t have them for a month and then start eating/drinking them again, you will know if they help you or not by how you feel.

This plan does have a stage known as the reintroduction stage where AFTER the 30 days of eating the way they asked you to, you eat a food/s from one of the groups for 1-4 days, then go back to the Whole30 plan for 2 to see how the body reacts, then the next 1-4 days, eat from another bad food group and go back to the same diet for another 2 and all the way until you go through all 5 groups, separately. This is how you examine what’s good and what isn’t.

Many areas of this book don’t talk about the plan, they talk about other stuff:

So from the Kindle version of the book, it looked like about 20% of the book was about the plan itself, while the other 80% was about preparing for every possible situation you can run into when doing this plan. They really cover everything….

Then there is also a HUGE chunk of this book which is devoted to recipes and they explain everything about preparing it to when to eat it, to even when to eat before/after workouts. There is an incredible level of detail to this.

3 out of 5 stars. Great health plan with very detailed options. While weight loss can come from this plan and it probably will if you’re unhealthy/overweight.

Look at Whole30 as a health plan, not a diet. If your goal is health improvement with weight loss being secondary, Whole30 is a wonderful plan, though not a simple one.

It isn’t just 30 days either, the 30 days are just the period without the certain foods, then there’s 10 days of reintroducing the bad ones, but that’s a speedier version. There is also a more long term approach where you decide how long you will need to be reintroducing the foods. I recommend the 10 day one because there is structure.

But Whole30 isn’t just 30 days long, it’s a lot more if you really want to get it’s greatest benefits. The first 30 days “cleanses you” of the bad things, then the next 10 and all the days-months and possibly a lifetime after that is all about continuing to stick to it so if you followed this plan, felt great, keep sticking to it.

46 thoughts on “Whole30 Review: It’s Not Actually a Diet, It’s Something More.”